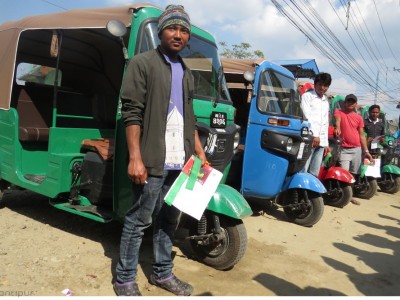 Five men from the Bote community have received auto rickshaws under an instalment scheme introduced by the Chitwan National Park (CNP).

“For the first time, the CNP has launched an income-generating programme for the marginalised Bote community,” said Mitralal Bote, chairman of the Chitwan Nepal Bote Samaj.

“The CNP has been conducting a revolving fund for impoverished households to help them generate income. We purchased auto rickshaws from that fund and distributed them to Bote youths,” said Lokendra Adhikari, assistant chief conservationist of the CNP.

According to the consumer committee, they have invested Rs 555,000 to purchase one auto rickshaw.

“The recipients have to pay back the money in instalments within three years of receiving the vehicles,” said Shankar Mahato, chairman of the Patihani Buffer Zone Consumer Committee.

The Bote community is a marginalised group of people that largely depend on fishing for their livelihood. But, since the establishment of the CNP, authorities have tightened fishing activities in the river.

“It’s difficult for us to earn our daily bread when fishing activities are restricted,” said Bharat Bote, a resident of Patihani in Bharatpur Metropolis-22, Chitwan.

The park has implemented rules with some strict guidelines for fishing activities in the river. According to the rule, locals are also prohibited from plucking edible ferns and other wild leafy greens found in the forests.

With this new scheme of the CNP, many from the Bote community will have a chance at having a stable source of income.

“Now, I don’t have to break rules and fish in the river to make my ends meet,” Bharat said.

In Sauraha area, an auto rickshaw makes over Rs 1,500 per day. There are 95 Bote households in Patihani alone.

Indira Bote, leader of the Bote community, said there are only five Bote youths in Patihani who know how to drive auto rickshaws. “We are encouraging Bote people to learn income-generating skills rather than just depend on fishing for their livelihoods,” she said.